Doc Thomas and His House 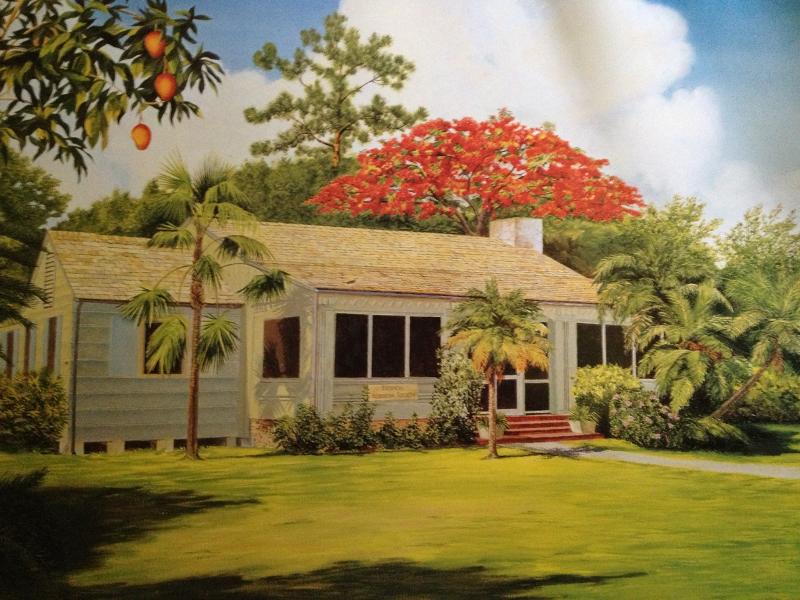 Since becoming Tropical Audubon Society’s headquarters in 1976, the Doc Thomas House has been designated a Miami-Dade County Historic Site and a Florida Heritage Site as well as being listed in the National Register of Historic Places. The house’s comprehensive historical recognition is due to the community significance of the original owner, its current owner and its architect along with the house’s distinctive architectural characteristics and appearance.

Arden Hayes Thomas, Jr., a pharmacist who moved from Indiana to the Larkins/South Miami area in 1925, opened his O. K. Drug Store on the ground floor of a brand new two-story apartment building on the north (Coral Gables) side of Sunset Drive in June, just months before the Great Miami Hurricane of 1926. He later opened the O. K. Feed Store on the west side of the same building and became known throughout the community as “Doc” Thomas, a sign of both respect and affection. For approximately 10-15 years, Thomas operated the two stores at this Sunset Drive location before moving them to a one-story building facing South Dixie Highway (U.S. 1), just east of Red Road. Born in 1887 in Fortville, Indiana, Thomas had earned his B.A. degree in 1909 from Indiana University with a major in English. His apprenticeship in pharmacy and the name he chose for his businesses followed family tradition: his father was a druggist who co-owned the O. K. Drug Store in Fortville. Although Thomas closed the drug store in the mid-1950s, the O. K. Feed Store continued operations and is presently located in the Homestead area.

While managing his two stores on Sunset Drive, Thomas invested in a significant tract of wooded property (almost 2.5 acres) on the south side of Sunset Drive in the subdivision of High Pines. By 1931 he was ready to build a residence on the property for himself and his mother, Margaret, and commissioned Robert Fitch Smith, one of the first six graduates of the University of Miami architecture program, to design a home that would blend into the natural, “piney woods” landscape. Smith had been a vocational education teacher at Miami High School during the 1920s. In this, his first residential commission, Smith used this previous experience with the decorative and manual arts, along with his more recent architectural education, to create a sophisticated version of Florida wood-frame vernacular architecture.

Although rustic in appearance, the house exemplifies the influence of the Arts and Crafts movement in its detailed woodwork patterns, striking limestone-faced fireplace, numerous built-in features and use of native building materials (i.e., cypress, oak, pine, mahogany, and two types of local limestone). Completed in 1932, the house has garnered much attention over the years: first, for its distinctive architecture and ornamentation; later, for its historical value. Smith went on to a distinguished and prolific career as a South Florida architect, was an instructor in the University of Miami’s initial architecture department and served on the first City of Miami Planning Board.

As Doc Thomas aged and then retired from fulltime management of his stores in 1956, he traveled extensively throughout the world. Eventually, he also made a decision that would have long-term, far-reaching consequences for Tropical Audubon Society (TAS). Thomas was a lifelong nature lover with a particular interest in birds and had participated in birding trips with Florida Audubon Society. As a bachelor with no children, Thomas decided to act on his conservationist beliefs and deeded most of his High Pines property (about 2.2 acres), including the house, to the local, Dade County-based Tropical Audubon Society, to ensure the property’s preservation and educational use to benefit both TAS and the general public. He and TAS representatives executed the life estate deed on December 30-31, 1974. Exactly one year later, December 31, 1975, Doc Thomas passed away. Since 1976 the house has functioned as the home of Tropical Audubon Society while the surrounding acreage now serves as the Steinberg Nature Center.

Keep South Florida's Voice of Conservation clear and strong. Join, Give and Volunteer! You'll be helping TAS champion the environment and grow our Mission.